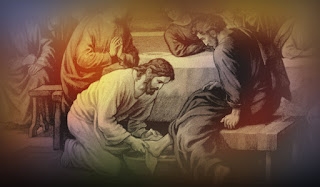 Bid the older men be temperate, serious, sensible, sound in faith, in love, and in steadfastness.

When I started this blog, I was resolved to keep political matters out. I wanted to focus on the Bible, on God, and on how to live in accordance with both.

Of late, political matters have intruded, perhaps inevitably so. Wherever there are men gathering together, there will be politics.

The catalyst for Schumer's descent into inane idiocy was the recent debt limit debate in the US Senate, which had been stymied for quite some time until Senate Minority Leader Mitch McConnell brokered a temporary compromise to extend the federal debt limit until some time in December.

The merits and demerits of the debt limit, and the political positions staked out by Democrats and Republicans, are not at issue here, and I do not propose to discuss them. What is at issue was a bizarre speech delivered by Senator Schumer after the Senate successfully voted to end debate on the debt limit legislation, allowing the bill to proceed to a final vote.

Courtesy of C-Span, Senator's Schumer's remarks can be watched below:

In the background, one can see another Senate Democrat, Senator Joe Manchin of West Virginia, burying his head in his hands listening to Schumer's partisan rhetoric. Senator Manchin was later quoted as saying the speech was inappropriate.

“I didn’t think it was appropriate at this time,” Manchin later told reporters. “We have to de-weaponize. You can’t be playing politics. None of us can — on both sides,” Manchin said. “Civility is gone.”

Sen. John Thune (R-SD), who voted to end the filibuster and pass the measure, said he confronted Schumer after his comments.

“I thought it was totally out of line,” Thune said. “I just thought it was an incredibly partisan speech after we had just helped him solve a problem.”

Neither Temperate, Nor Serious, Nor Sensible. Nor Necessary.

Regardless of political affiliations or ideology, there is no denying that Senator Schumer's remarks were neither temperate, nor serious, nor sensible. Rather, they were aggressive, even angry and accusatory, and calibrated to put the Senate Republicans on the defensive.

Paul's exhortation to Titus teaches us that the elders in any group--and, as Majority Leader, Senator Schumer is unquestionably one of that body's elders--are supposed to set an example of temperance, seriousness, and sensibility. Aggressive, angry, accusatory words do not conform to such an example. Senator Schumer failed to measure up to the example he is called to set.

Moreover, the example that should be set is that all men should love one another. Paul reminds us of this second of the two Great Commandments in Romans 13:8-10:

The man who is intemperate in his words is, as a general rule, not showing love to his neighbor--and, by extension, failing to show love even to himself. Intemperate words demean us, as Jesus Himself teaches us in Mark 7:20-23:

And he said, “What comes out of a man is what defiles a man. For from within, out of the heart of man, come evil thoughts, fornication, theft, murder, adultery, coveting, wickedness, deceit, licentiousness, envy, slander, pride, foolishness. All these evil things come from within, and they defile a man.”

Leaders lead by setting the example described in Titus, of temperance, seriousness, and sensibility. Leaders lead by showing how we avoid giving rise to evil thoughts, to the wickedness, deceit, and pride that can contaminate everything we do if we are not careful. Leaders lead by putting the commandment to love our neighbors even as we love ourselves into daily practice.

Leaders are rational, not emotional. Leaders are deliberate, not impulsive.

Senator Schumer's words were very emotional and presumably very impulsive. They were also simply not necessary. Within the Senate rules, the Republicans had already given Schumer the critical vote he needed to move the debt limit legislation forward. They had done what was promised, and had even, to borrow Senator Schumer's words, "gotten out of the way." There was literally nothing left for Schumer to accomplish on that particular bill. The sober and deliberate thing--the smart thing--to do would have been to declare victory and move on to the next battle.

Words Have Consequences Just As Do Actions

Already, Senator Schumer's speech is producing political fallout. The day after Schumer took to the floor of the Senate to deliver his remarks, Senate Minority Leader McConnell wrote a letter to President Biden telling him that the Senate Republicans would not provide Schumer with crucial "bipartisan" votes when the debt limit comes up for debate again in December.

McConnell and 10 other Senate Republicans on Oct. 7 joined Democrats in temporarily raising the ceiling through Dec. 3, enabling Democrats to avoid using a process called reconciliation.

“Last night, Republicans filled the leadership vacuum that has troubled the Senate since January. I write to inform you that I will not provide such assistance again if your all-Democrat government drifts into another avoidable crisis,” the Republican wrote in a letter to the president.

When a moment comes when Schumer needs Republican votes to pass a crucial piece of legislation (such as the next debt limit bill which will come up in just a couple months), Senator McConnell is pledging to not be there--and is that really so surprising, given Senator Schumer's urge to blame Republicans for the debt limit crisis? Who among us would help someone a second time, when after the first he immediately turns to blame us for all his particular ills?

There is no way to know if extending the proverbial olive branch to the Senate Republicans after moving the debt limit bill out of debate and putting it to a vote would have made much of a difference. Senator McConnell could easily use all the many Senate rules to keep future bills at bay even if Schumer was effusive in his praise of McConnell's bipartisianship. However, we already know from Senator McConnell's letter to President Biden is that future votes on the debt limit are will not be a showcase for bipartisan cooperation, and McConnell is pointing to Schumer's words as the very obvious--and foreseeable--justification.

It is no exaggeration to say that Senator Schumer may have quite possibly snatched defeat from the jaws of victory.

In matters small as well as large, adherence to God's will conveys immediate practical benefits. God's Law is not merely the right thing to do, it is the practical thing to do as well.

The practical benefit of temperance, seriousness, and sensibility, is they reduce the number of people in conflict with each other. Well chosen words are less likely to offend unintentionally. When a community's elders show temperance, seriousness, and sensibility, by that example they help guide people away from the toxic pattern of making enemies--a pattern that is far too prevalent today and that desperately needs to be broken.

When leaders and elders are temperate, serious, and sensible, they make it much easier for people within the community to come together even over contentious issues. Senator McConnnell does not write that letter, with those exact words, but for Senator Schumer's highly partisan rant. Senator Manchin does not publicly describe Senator Schumer's remarks as intemperate.

Senator Schumer turned more than a few of his fellow senators against him with his little rant. At a time when it is simply good tactics for him to be making friends, he decided to make enemies.

There is no apt description for such a choice but to call it stupid.

Be Temperate, Serious, Sensible. Do Not Be Stupid

The Bible calls us all to such behavior. So does simple common sense--something Senator Schumer completely lacked when he chose to give a partisan rant in a moment that called for gratitude and respect.

Ultimately, the Biblical teaching is simply this: Be temperate, serious, and sensible. Do not be stupid.

By Peter Nayland Kust on 10 October
Email ThisBlogThis!Share to TwitterShare to FacebookShare to Pinterest