You Shall Not Hate 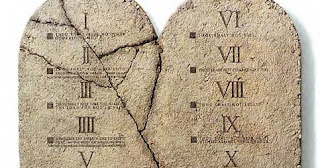 The Sixth Commandment is simple and straightforward: You shall not commit murder. We are not supposed to kill one another.

It takes no great leap of logic to understand why killing is wrong. Life is, after all, God's most precious gift to us--it is unconscionable for any man to take away what God has given.

Still, in Jesus' Sermon On The Mount, He took the concept of killing to an extreme. Not only is the actual taking of life wrong, He teaches us, but the emotions and mental states that lead to killing--specifically, hatred, anger, and contempt--are just as wrong.

While Jesus' teaching is uncompromising, we should remember that it--like all of His teachings--is not without precedent. Even in the earliest chapters of Genesis we see the admonition against anger and hate, when God reproaches Cain for being angry with Abel (Genesis 4:6-7):

Then the Lord said to Cain, “Why are you angry? Why is your face downcast? If you do what is right, will you not be accepted? But if you do not do what is right, sin is crouching at your door; it desires to have you, but you must rule over it.”

The teaching in Genesis is itself simple and straightforward: each of us must do what is right, without regard for what others do. If we become angry with our fellow man, we are allowing his conduct to influence our own--and that is contrary to God's will.

God's prohibition against acting in anger is so strong that He instructed the Israelites to establish "cities of refuge", to where a man who accidentally killed another might flee in order to avoid the angry retributions of men.

Then the Lord said to Moses: “Speak to the Israelites and say to them: ‘When you cross the Jordan into Canaan, select some towns to be your cities of refuge, to which a person who has killed someone accidentally may flee. They will be places of refuge from the avenger, so that anyone accused of murder may not die before they stand trial before the assembly. These six towns you give will be your cities of refuge. Give three on this side of the Jordan and three in Canaan as cities of refuge. These six towns will be a place of refuge for Israelites and for foreigners residing among them, so that anyone who has killed another accidentally can flee there.

When we hate--when we are angry with one another--and particularly when we speak or act on that hatred and anger, we are going against God's will.

Hatred is a sin. Anger is a sin.

One only need browse a small sample of current news headlines to see that, in 2021, hatred is definitely on the rise.

One does not even need to read these articles to sense the disdain, contempt, and hatred conveyed by the just the headlines. "Anti-vaxxer" has become the modern-day equivalent of "Raca" ("Raca" was an ancient Jewish epithet suggesting a person was "worthless" and contemptible), a term of derision and hatred. When even our presumptively objective news media casually uses such language, there is no conclusion to be made but that hatred for others is being normalized in the world. The very thing God commands us to not do is becoming commonplace, ordinary, and habitual.

Hatred is rising--and hatred is a sin.

The brutal truth of hatred is that it, by its very nature, separates man from man. Hatred creates false divisions among men, divisions which were never placed there by God. God created Man in His own image--all men and all women are by definition cast in the image of the Almighty, and any distinction imposed by men is therefore by definition a desecration of that image. The separations among men created by hatred in all its forms,

The Apostle Paul reminds us of this basic unity of Mankind in Galatians.

There is neither Jew nor Gentile, neither slave nor free, nor is there male and female, for you are all one in Christ Jesus.

As Dr. Martin Luther King, Jr., pointed out in his "Letter From A Birmingham Jail", separation is a fundamental denial of basic humanity.

Segregation, to use the terminology of the Jewish philosopher Martin Buber, substitutes an "I-it" relationship for an "I-thou" relationship and ends up relegating persons to the status of things. Hence segregation is not only politically, economically and sociologically unsound, it is morally wrong and awful. Paul Tillich said that sin is separation. Is not segregation an existential expression 'of man's tragic separation, his awful estrangement, his terrible sinfulness?

The false divisions spawned by hatred leads to what sociologists call "othering":

The use of other as a verb is rooted in sociology: to other a certain culture or individual is to treat that culture as fundamentally different from another class of individuals, often by emphasizing its apartness in traits that differ from one's own. The idea of othering, as sociologist Yiannis Gabriel describes it, is evident in the use of the term barbarian to refer to a foreign culture; Gabriel posits that "it may be initiated by an encounter between civilizations that have no previous tradition of contact or understanding."

Othering can be as simple as speaking of a group of people as "them" in relation to another's "us," or even putting the definite article the in front of a label, as linguist Lynne Murphy writes in Quartz:

“The” makes the group seem like it’s a large, uniform mass, rather than a diverse group of individuals. This is the key to “othering:” treating people from another group as less human than one’s own group. The Nazis did it when they talked about die Juden (“the Jews”). Homophobes do it when they talk about “the gays.” In my research on British and American cultural relations, I’ve found that British writers’ views on American English are a good predictor of whether they’ll write “Americans say it that way” or “The Americans say it that way.” Those who feel that American English threatens British English use “the” to hold Americans at arm’s length (possibly while holding their noses).

Othering is the creation of the false separation "us" and "them"--with "them" being a distinctly inferior group. Such falsehoods are noxious enough on their own, but here in 2021, they are being used against a particularly vulnerable assemblage of people: the sick. Blogger Daisy Luther, in describing her experience of COVID-19 infection while in Mexico, made this disheartening observation about how her sickness was received by others:

The media-propelled fear justifying the lockdowns are every bit as infectious as the virus. You’re like a pariah. A leper. People you know wouldn’t even consider coming near you. I have a kindly neighbor who has dropped off supplies at the door for me, but aside from that, people locally who have done work for me in the past are hesitant to pick up my groceries or handle small errands.

Even some people who are long-distance friends who I talk to online on a daily basis completely disappeared. Some of them were so adamant that Covid is a “scamdemic” they didn’t want to hear about my experience. I didn’t expect emotional fallout from having Covid, but it was present, particularly as it seemed to go on and on. Two weeks feels like a really long time to be sick.

How can anyone presume towards charitable mien and Christian conscience when the sick are treated thus? The answer, of course, is that they cannot. We cannot.

Regardless of how one views a particular bit of medical research or proposed therapy for any disease, without exception we are called to care for the sick, to pray for their healing, and to offer them whatever comforts lie within our power. Treating the sick as "lepers" and "pariahs" falls way short of this standard.

You Shall Not Hate

You shall not hate.

By Peter Nayland Kust on 09 September
Email ThisBlogThis!Share to TwitterShare to FacebookShare to Pinterest