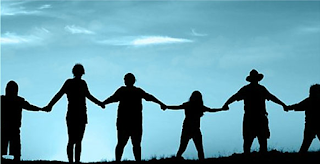 There is neither Jew nor Gentile, neither slave nor free, nor is there male and female, for you are all one in Christ Jesus.

God created Man in His image. Every man, every woman, every child, is a reflection of God.

Let that thought sink in....every man, woman, and child is a reflection of God.

We Are All God's Children

Therefore, without exception, all the labels we use to separate, segregate, and subdivide ourselves from ourselves are superfluous. They have no real meaning, and serve no good purpose.

To Label Is To Separate, To Segregate--And To Sin

What purpose do labels serve? How does it build community or serve God to say this man is so-and-so and that man is such-and-such?

It takes no detailed review of the history of the world to see that such separations and segregations are intrinsically evil, and that they lead to even greater evils. The bigotry, discrimination, racism, and anti-Semitism that have plagued civilization seemingly forever all begin with separation and segregation; they begin with arbitrary, capricious, and pointless labels.

We do well to recall what Dr. Martin Luther King, Jr., pointed out about segregation in his "Letter From A Birmingham Jail":

Segregation, to use the terminology of the Jewish philosopher Martin Buber, substitutes an "I-it" relationship for an "I-thou" relationship and ends up relegating persons to the status of things. Hence segregation is not only politically, economically and sociologically unsound, it is morally wrong and awful. Paul Tillich said that sin is separation. Is not segregation an existential expression 'of man's tragic separation, his awful estrangement, his terrible sinfulness?

When we separate--when we segregate--we sin. It really is that simple.

Consider the labels that get thrown around almost casually in the mainstream media: "anti-vaxxer", "Trump Supporter", "vaccinated", "homeless". Consider the many ethnic and racial slurs that are used to crudely define people. Can anyone seriously argue that beneath these labels is anything other than contempt, condescension, and even hatred for one group or another, for one person or another? Can anyone honestly say that using such labels serves any purpose other than dividing the world into an "us" and a "them"?

I do not think they can.

God's Law is clear on this point: we are to love and not label our neighbors.

You shall not take vengeance or bear any grudge against the sons of your own people, but you shall love your neighbor as yourself: I am the Lord.

Moreover, as Jesus makes clear in the Parable of The Good Samaritan, we are all called to be neighbors to each other:

But he, desiring to justify himself, said to Jesus, “And who is my neighbor?” Jesus replied, “A man was going down from Jerusalem to Jericho, and he fell among robbers, who stripped him and beat him, and departed, leaving him half dead. Now by chance a priest was going down that road; and when he saw him he passed by on the other side. So likewise a Levite, when he came to the place and saw him, passed by on the other side. But a Samaritan, as he journeyed, came to where he was; and when he saw him, he had compassion, and went to him and bound up his wounds, pouring on oil and wine; then he set him on his own beast and brought him to an inn, and took care of him. And the next day he took out two denarii and gave them to the innkeeper, saying, ‘Take care of him; and whatever more you spend, I will repay you when I come back.’ Which of these three, do you think, proved neighbor to the man who fell among the robbers?” He said, “The one who showed mercy on him.” And Jesus said to him, “Go and do likewise.”

We can never be called, therefore, to label our neighbors. When we label, we separate, we segregate--and we sin.

Man is a social creature. We are constructed to come together in families and communities. We are made to seek out the company of our fellow humans. The entirety of human history stands as unequivocal proof of this proposition.

Rather, we should seek to be as God created us--forming families, forming communities, building societies. That is how we love each other, love ourselves, and love God, as we are commanded to do.

By Peter Nayland Kust on 12 September
Email ThisBlogThis!Share to TwitterShare to FacebookShare to Pinterest
Labels: love