Saying "Yes" And Saying "No" 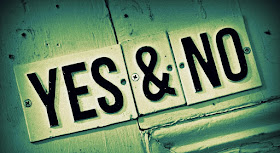 And do not swear by your head, for you cannot make even one hair white or black. All you need to say is simply ‘Yes’ or ‘No’; anything beyond this comes from the evil one

I came to appreciate the subtlety of this verse a few years ago, as I was grappling with the challenge of defining my particular job and role with my employer. As often happens within technical professions, the evolution of my work team had resulted in some job expectations and responsibilities which in some ways tended to contradict each other. Ultimately, resolving those conflicts came down to this: saying "yes" and saying "no".

In every choice we make, in every "yes" we utter, we embrace all that follows from that choice. Set a foot upon a path, and invariably one must encounter all that lies along that path. Only by choosing a different path can one evade any part of that.

One cannot say "yes" only to the pleasant outcomes of a choice; one MUST say "yes" to all outcomes of the choice, the good and the bad. All that is not on the path, all that does not follow from the choice, can never be embraced, for the simple reason it lies on a different path, on the path to which one has said "no."

Whatever is on a path is on that path; whatever is not on that path is on another path. Whatever comes from saying "yes" can only be avoided by saying "no." So it is that there never is any mitigation, any watering down of consequences good or bad. There is no "but" to follow the "yes" or the "no."

If we say more than "yes", if we include the "but", we are of necessity choosing a different path than the one we seemingly embrace with the "yes"; adding to the "yes" or the "no" alters the choice; it alters the path. By adding to the "yes" or the "no", we deceive ourselves, as well as others, and from such errant choosing we inevitably find ourselves in a strange and unexpected place. Wander down a road thinking it is another and invariably one becomes lost and disoriented; the one must find the way back to a known place from which to choose anew. There is a discernible evil, a pernicious deception, that comes from corrupting a "yes" or a "no" with "but."

There is also discernible evil in saying "yes" but doing "no."  This, of course, is the essence of a lie.  To say "yes" yet do "no" is a path of deception. Moreover, by saying "yes" and doing "no" puts us among the deceived, for again we are ultimately choosing a path different from the one we think we are on, and inevitably we will wind up in that strange and unexpected place.

Moreover, anything beyond the saying of "yes" or "no" is ultimately superfluous and irrelevant.  There is no emphasis to be added to "yes" or to "no", no extra word or syllable or sound which will alter in any way the nature of the choice being made. The choice is bound up in the "yes" or the "no", and it is the choice that leads to the consequence, and nothing else. It is the choice that sets one's foot upon a particular path, and it is that choice that leads one to whatever that path holds, be it good or bad, easy or hard. Say "yes", or say "no", choose this, or choose that, but recognize the choice being made, and recognize the consequences that will arise--not "may" arise, but "will" arise--from that choice. To say more than "yes", to say more than "no", is ultimately a distraction, a deception, leading to confusion.

Let the word be simple, let the choice be simple, and simply say, simply choose--and then simply do.  As no less a thinker than Einstein advises, "Everything should be made as simple as possible, but not simpler"; complexity is confusion, simplicity is certainty.

In the work challenges I mentioned at the start of this meditation, the simplicity of "yes" and "no" led to a choosing of priorities--by myself and by others. Being committed to the "yes" or the "no" also meant developing trust that others would likewise choose, setting their priorities and performing whatever choices they had made. It meant embracing certain responsibilities, and claiming certain rights, while rejecting other responsibilities and relinquishing other rights.

Saying "yes" and saying "no" did not avoid or preclude certain frustrations, merely allowed those frustrations to be seen as the consequences they are, and to either embrace those consequences or let them be the catalyst for new choices, with new paths and new understandings to follow.

One word. One syllable. Say "yes", or say "no."  Anything more than that is a mistake.
By Peter Nayland Kust on 01 August
Email ThisBlogThis!Share to TwitterShare to FacebookShare to Pinterest