A Savior Is Born

And there were shepherds living out in the fields nearby, keeping watch over their flocks at night. An angel of the Lord appeared to them, and the glory of the Lord shone around them, and they were terrified. But the angel said to them, “Do not be afraid. I bring you good news that will cause great joy for all the people. Today in the town of David a Savior has been born to you; he is the Messiah, the Lord.
Luke 2:8-11

The Gospel of Luke tells us that Jesus, the only begotten Son of God was born in the town of Bethlehem, in Judea. Christian tradition tells us He was born on December 25, the day we know as Christmas.
December 25 Is The Wrong Date

A moment's scrutiny of the Gospels is all that is needed to know that Christian tradition is unquestionably wrong. Jesus was not born in December.

The Gospel itself does not give a date, nor even a season. Little clues such as the presence of shepherds nearby spending the night in the field with their flocks tell us the season was possibly in the spring. Judean winters tend towards the cold and rainy, so it is unlikely shepherds would be in the fields at night during that time, but would instead seek shelter. Other Biblical scholarship suggests that, based on the time references for the birth of Jesus' earthly cousin John the Baptist, He was born during the early fall.

All scholarship agrees the December 25th date is almost certainly not accurate.

How the celebration of Jesus' birth comes to be on December 25th is, as best as anyone can determine, something of a compromise with the pagan Romans among whom the early Christian communities coexisted (not always peaceably). The first Christmas celebration in December appears to have been some time during the 4th century. Given the proximity of December 25th to the Winter Solstice, and it falling in the middle of the Roman feast of Saturnalia, the possibility early Christians co-opted pagan celebrations, either to "fit in" or to build connections among pagan communities in order to encourage conversion to Christianity, cannot be discounted.

Suffice it to say, December 25th is not Jesus' birthday.

A good deal of Biblical scholarship is frustrating because, in so many instances, specific proofs are missing, such as easy linkages to the known histories of Rome and of the Middle East at the time.  The Bible places Jesus' birth during the time of the Emperor Augustus, makes reference to the Roman governor of Syria, but beyond these sparse historical references dates are simply not part of the narrative structure of the Gospels.

Why did the chroniclers of Jesus' ministry not include such basic information? The authors of the Gospels took pains to record Jesus words, yet they ignored such obvious personal details as His height and His appearance. These are rather basic bits of information that any biographer would quite normally include, yet they are absent from the Gospels.

What are we to make of such omissions?

Such details simply do not matter.

The Gospels: Myths of Jesus

It follows that to search after the historicity of the Gospels is to miss their point entirely. The Gospels are not history, nor should the Bible be read as history. Rather, the Bible is mythology, and the Gospels are, properly apprehended, myths of Jesus.

The great epic sagas of ancient literature, such as the Iliad and Beowulf, were the stories used in ancient societies to transmit important cultural and ethical values from one generation to the next. Each of these ancient myths were, to borrow from the Bard, a "story the good man shall teach his son."

The Gospels are the stories--the myths--good men use to teach their sons the vital ethical and moral truths of Christianity.

Christmas Is The Beginning

Every man's story begins when he enters into this world. The story of Jesus is no different. The Nativity is the beginning of Jesus' story, and so it is also the beginning of the promise and hope that is the Good News of Jesus Christ. He who was born a poor traveler on the road brings a message of new life--and eternal life--for all men, regardless of their past or their present. Beginning with the Nativity, redemption replaces atonement. With Jesus, forgiveness replaces expiation. In Jesus, fear of the past gives way to hope for the future.

That hope is worth celebrating on any day--even on December 25.

That hope should be celebrated on every day--not just on December 25.

Merry Christmas to all.
By Peter Nayland Kust on 25 December No comments:
Email ThisBlogThis!Share to TwitterShare to FacebookShare to Pinterest 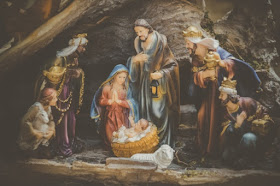 Today in the town of David a Savior has been born to you; he is the Messiah, the Lord.
Luke 2:11
Every December 25th, Christians everywhere celebrate the birth of Jesus Christ--the Son of God, through whom all of Mankind is offered eternal Salvation and life everlasting.
Every December 25th, people of all faiths unite in sharing this Christian holiday, joining the religious observance with interfaith wishes of peace on Earth and good will towards all men.

However a man keeps the Christmas holiday, it surely is among the greatest testimonies of Jesus that, in some fashion, nearly all the nations of the world keep some observance of the holiday. Perhaps that is the true holiday spirit, the real holiday message--that this one moment can be shared by all. One does not need to be a Christian to wish for peace in the world. One need not be baptized to wish for blessings of health and prosperity among all men, and an end to poverty, disease, crime, and violence. Such desires are not "Christian", but rather "human". Regardless of what we believe, it may be fairly presumed we all want a better world.

Ultimately, that is the "Christmas spirit"--the hope that a better world can be achieved; that the lion can lay with the lamb; that people can be generous,  can be benevolent, can put aside violence, and anger, and hate. We can form a more perfect Union among men, we can establish Justice, we can insure Tranquility, promote the general Welfare, and secure the Blessings of Liberty for all men and all generations. No matter wide of the mark we yet are, no matter how many times we have tried and failed, we can do these things.

This is how I choose to keep the Christmas holiday: with a simple prayer for all Mankind, that all these things which we can do, we yet will do. I pray that our failures will not discourage us, that our sins will not defeat us, that our vices will not overmatch our virtues. I pray that we will make, not a perfect world, merely a better one.